WWS SHOW CHOIRS
Thank you so much for supporting the first ever Virtual Choral Classic!  The results will be announced at 7 pm CST here:
https://youtu.be/KUOVVQcZFoc
If you are unable to attend the WWS Show Choirs' Virtual Choral Classic and would like to donate please follow the link below.
Donate Here
Click here to listen to a message from chris miller 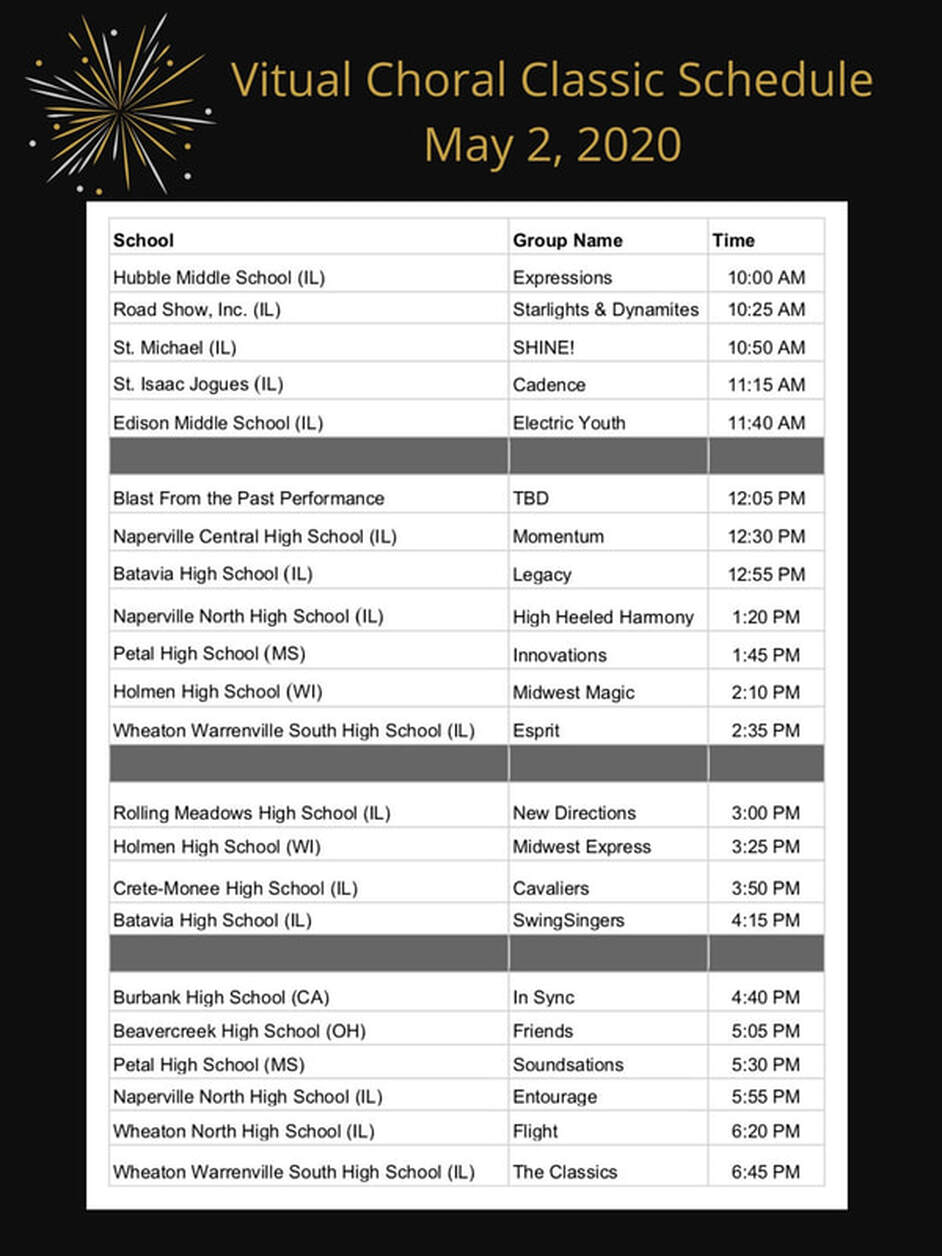 WWS to Host First-Ever Virtual Show Choir Competition in U.S!
We are excited to announce that Wheaton Warrenville South High School will host the country’s
​first-ever virtual show choir competition on May 2. ​
​
​Stay tuned for more information about our event and schedule in the coming days!
Follow us on Instagram at @choralclassic, Facebook at WWS Choral Classic,
​Twitter at @choralclassic, and YouTube at WWS Showchoirs.
​

This event replaces the Choral Classic, one of largest show choir competitions in the U.S. As most of you know, we were set to host the competition in March but it was cancelled due to the pandemic. It also was our program’s largest fundraiser.
This new version will feature 18 groups that were originally scheduled to participate last month, from states including California, Mississippi, Ohio and Illinois, as well as showcase performances from each of our programs at Wheaton Warrenville South and Edison Middle School. We will even have an alumni compilation included.

How will it work? The competing choirs will be submitting their best video performances and viewers from around the country are invited to vote for their favorite performances. In the spirit of a fundraiser, viewers are offered a donation level with each vote, with the lowest donation option the equivalent to the price of a ticket for attending the live event.  Two types of winners in each division will be selected, the one with the most votes and the one who raises the most money. The competition features four divisions: middle school, single gender and two for the mixed category.


ABOUT WWS SHOW CHOIRS
Wheaton Warrenville South High School features two award-winning show choirs.  The single-gender group (Esprit) dominated at competitions around the country this past spring as undefeated Grand Champions for their division.  The mixed group (The Classics) has placed in top rankings every time in each of the finals, including being named Grand Champions, as well.  The show band that accompanies both show choirs has taken home numerous awards this year, as well. The high school, located in the western suburbs of Chicago, hosts one of the largest show choir competitions in the U.S. each March with more than 30 teams competing from states across the country.  The Wheaton Warrenville South High School Show Choir program is directed by Chris Miller and Kyle Grace.